KHR just keeps getting better. It started off with a fair amount of training, and then lead to some awesome fights. Just as I had hoped, the Varia arc continued the plot and character development that began in the Kokuyo arc. (Not a complaint perse) Making this is my overall favorite arc of the show so this isn't my first rewatch, but I have put somethings down that may improve your first rewatch.

I just love the entire premise of the arc. And I feel like it is the best implamented overall when compared to the Manga. There are some things here that you don't get, or get as much of in other arcs, especially when it comes to different group of people contesting to be the next Vongola X. I mean, really, at this point in the show, which viewer hasn't looked at Tsuna and thought "this kid is gonna be Vongola X?"

Still I am not without complaints, right now there are 2 things in the anime that are bother me, the biggest being that most of the female characters in the show are unbelievably dense. I hope they change or that more interesting and less dense female characters get introduced as the series progresses.

The other one is Tsuna's uniform, which now has wavy edges around the collar and shoulder for no apparent reason. This is a minor complaint, so it hasn't really affected my enjoyment of the show, but I can't excuse lazy animation.

As I have said, the fights, the fights. The fights are amazing. Tsuna saving Lambo at the cost of losing his sky ring! Wow, this showed how his character had developed thus far, which was nice. 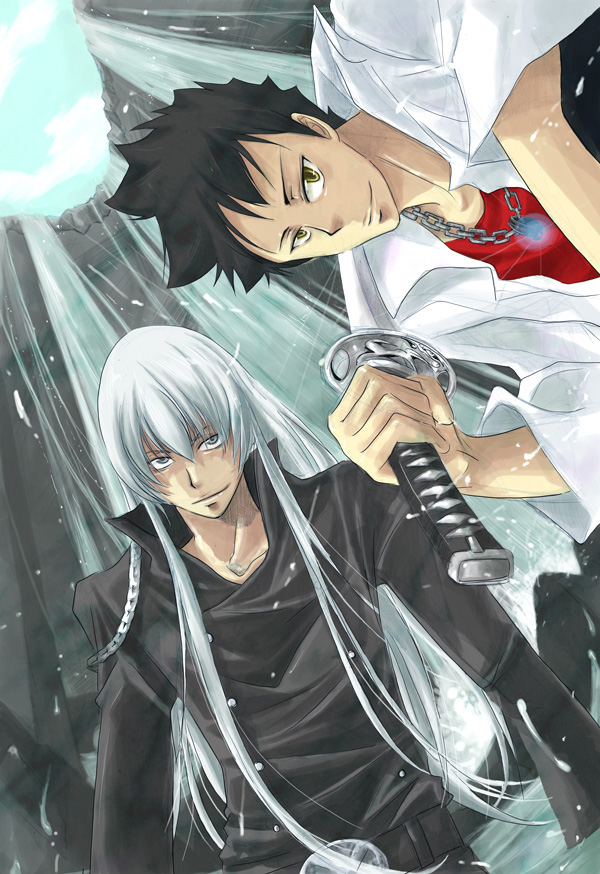 Just like Gokudera's fight, Yamamoto vs. Squallo made great use of its surroundings – this time with a flooding destroyed building. Really fitted well with their fighting styles.

This is my favorite fight of the arc.

It combines action and intellect and has the best setup to the fight. The team now can't afford another loss AND Yamamoto's opponent is Squalo (my favorite member of the Varia from the beginning and someone who's showed that they're a good threat by beating all of the guardians including Yamamoto before) AND there's no "good" outcome to the battle.

I loved Squalo because of his design, VA, and funny personality but there was definitely a sad thought in my head that once Squalo lost the battle, he'd get killed by the Varia. So there's stakes in either outcome of the battle. Yes, you could argue that it's obvious Yamamoto's going to be the winner because we need to see the other battles (also, opening) but this fight is less about "who will win?" but more about "HOW will Yamamoto win?" and this fight completely delivers there.

The end to episode 48 feels so hopeless with Yamamoto being completely outclassed and now knows that Squalo has beaten the invincible style before.

My friend predicted here that there'd be "a secret 9th stance" cause that's what anime does, but KHR did it even better. It made it so there was a reason Squalo didn't know about the 8th stance and a reason for Yamamoto to create his own stance and subvert the style. I also loved how the writers didn't just have Squalo lose because he couldn't recognize the attacks–he still had his artificial hand that could've killed Yamamoto if the 9th stance didn't involve reflection.

It was a great end to an exhilarating battle and Squalo was never more entertaining during it.

I was thinking that the fight would end with Yamamoto winning and then bringing Squalo to the Vongola side and while I never truly believed Squalo was killed by the shark, I still liked the overall direction of his character